I have been putting this post off. It seemed it would be one of those “do as I say, not as I do” scenarios. I have also received the full brunt of people’s opinions on the matter and I guess I’m dreading adding to that by posting this.

Perhaps I’m getting ahead of myself. I should start at the beginning, or to be precise, August of last year. That was when Quentin was out of the NICU, home from further hospital stays and things were finally settling in at home (4 months after he was born). With regards to toilet learning, Montessori homes/Nidos use cloth so as to give the child the opportunity to feel wetness, right from the beginning. Boy, did I ever have high hopes. My baby would never know the horribleness that is the disposable diaper. The waste, the chemicals. That was before he was born. After 4 months of being put in disposables by nurses, he was hooked. And to be truthful so were we. Please understand. We had beautiful, soft, natural, expensive cloth diapers given to us, and we did use them. Sort of. Every time we put him in them, this happened: 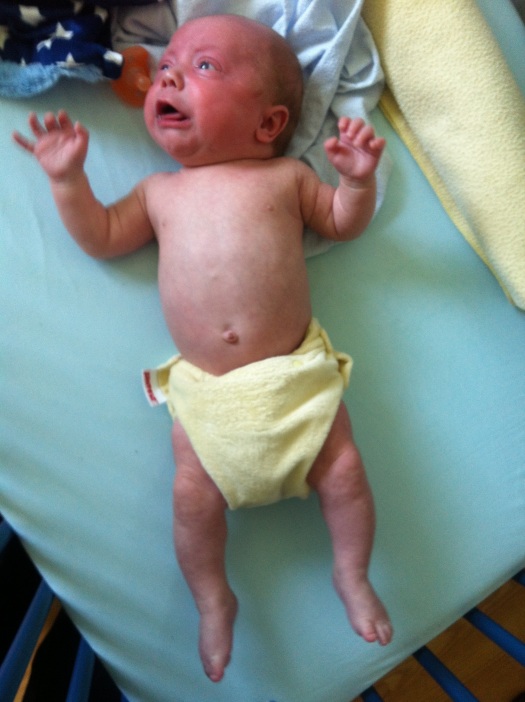 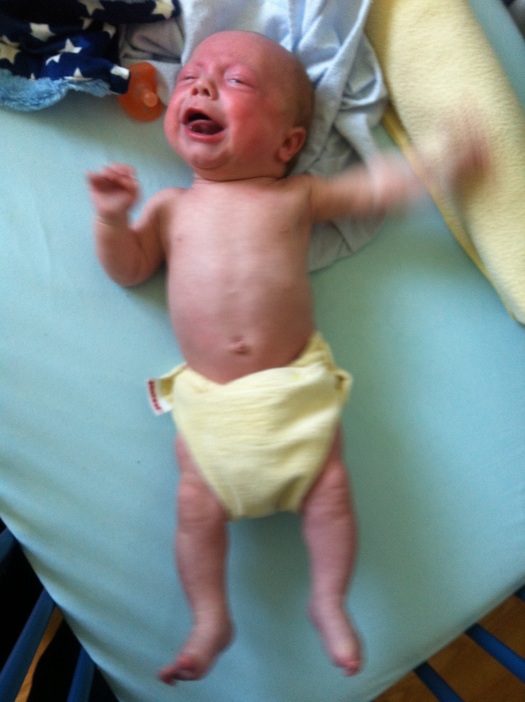 If they make cloth diapers for preemies, we certainly couldn’t find them around here. The beautiful soft cloth diapers were bulky, hot and hard to move around in. He got frustrated and so did we.

If at this point you’re rolling your eyes, stick with me. There is a light at the end of this tunnel.

Desperately wanting to bring Quentin’s diapering more in line with our Montessori values, we got a potty for him, and placed it in the bathroom when he was 8 months. This was only to have him see it. The Montessori pedagogy states that a child passes through the Sensitive Period for Toileting between 12 & 18 months old. We wanted to have him used to seeing the potty by then. We made no reference to it other than to casually say “Potty. That’s Quentin’s potty.” whenever we were in the bathroom with him for baths or while we brushed our teeth.

At 9 months we began Quentin sitting on the potty. Again it was not to do anything. Just to sit while we were in the bathroom. Following the child, we helped him off as soon as he did not want to be there, and we never left him there for an extended period of time. He would occasionally pee. It was more of a coincidence than anything.

At 10 months we set up his “Care of Self” area in the bathroom. 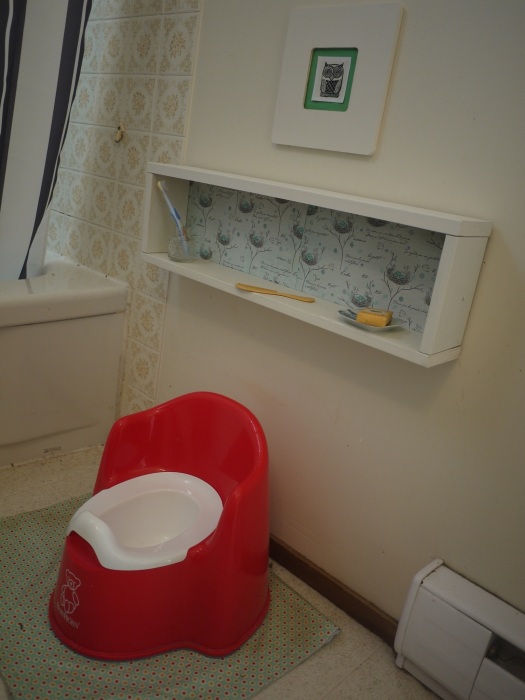 I made the small shelf out of 1/2 metre of trim, some pretty scrapbook paper and a cereal box back. I ordered some pretty laminated fabric with a red that matched the potty (because yes, I’m that person) and made a little waterproof pad. We have the worlds smallest bathroom. We needed something that worked without getting in the way. The shelf holds Quentin’s tooth brush, comb and soap with dish nicely.

We started really observing Quentin’s toileting routine. We started taking him to sit on the potty after every meal, before leaving the house, coming back to the house and before bed. Each time, we asked him “would you like to pee?” and only kept him there until he wanted to go. If he protested, we would not take him then and try later.

He caught on immediately.

At 12 months we decided that we were far enough along to progress to underwear at home. We searched everywhere for something that would fit him. I had wanted to try “Under the Nile” since I had read good reviews from other Montessori families. I ordered their smallest size (12 month) but Quentin is in (still!) 3-6 month clothes. They were just too big and not going to work.

I scoured the web and came across these. 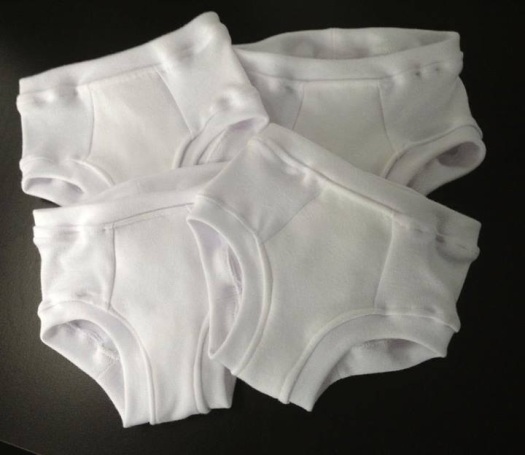 I sent off Quentin’s measurements and she made them for me. They are perfect.

At 14 months (12 1/2 corrected age) Quentin has been successful in staying dry all day (including naps) for the past 3 days. We continue to take him, and he lets us know by yelling if we’ve left it too long. We’re trying to add the ASL sign for toilet to his repertoire of signs. He takes pride in “going,” saying “I did it” and flushing the toilet after I empty the potty. We (here comes my disclaimer) have never used rewards of any kind, nor punishments for Quentin. When he has an accident, we will ask “Did you pee in your underwear?” He will usually answer with his noise for yes. Then we walk him to the bathroom and help him get into clean clothes and wipe up any mess. We never shame or scold him. Just carry on with our day.

I’ve ordered this to complete his “Care of Self” area. 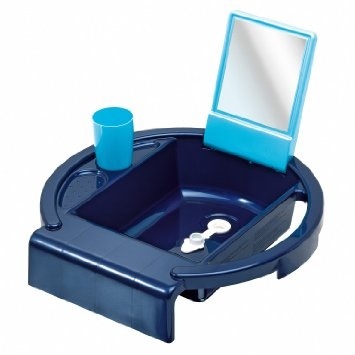 I had no idea these existed until I saw it Pinned. It attaches to the bathtub. The perfect height.

I never expected the backlash on the topic. From complete strangers but also sadly from family.
“Really cracking the whip” is a mild example. “Oh! Well! You do Montessori (accompanied by an eye roll) is more hurtful. The list goes on.
We are not completely delusional. We know there will be accidents, and we have chosen to wait a little before trying “diaper less nights”. Montessori’s definition of Toilet Learning is that the child learns to recognize and control his/her elimination. Not just dry pants. There is not so much a start, although maybe at birth, and not so much an end as there is a progressing in aptitude.

It may not be the right way for everyone, and I know that it definitely is not a strictly Montessori way, but it is the way our family has done it. We just “Followed the Child”. Hey, maybe not so far off the Montessori path after all. 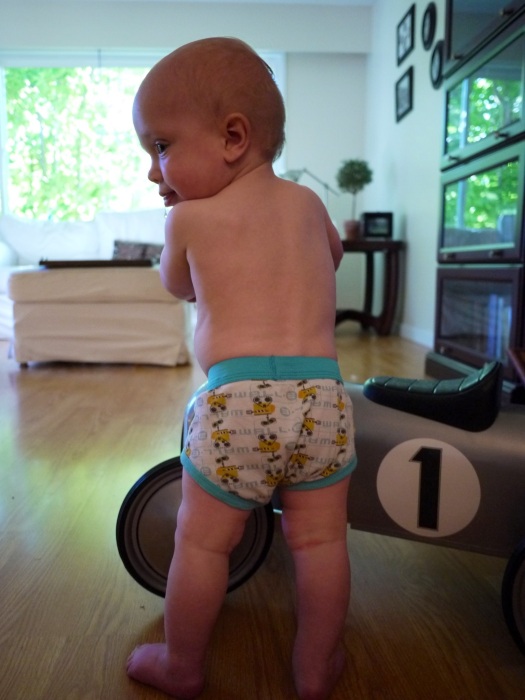